Who doesn’t love their Taco Tuesdays, or that Guacamole that your friend makes at every Saturday night get together, and don’t forget that amazing Barbeque that your neighbors arrange, your favorite Big mac, or the amazing spaghetti and meatballs that you like extra spicy. Is your mouth watering already? Or instead did all these dishes remind you of the excruciating heartburn and nausea you got after eating those things. If your answer is the latter one then this article is for you. Because no matter how much we deny we all want our days to end with a nice chilled drink and a couple of buffalo wings and pizza slices. But what happens next is that you stay up all night burping, burning sensation in the chest, a ball of hot blazing fire goes up and down your chest to your mouth. And when it doesn’t burn and burp then you are nauseated and vomiting. This extremely unpleasant yet common condition is medically referred to as GERD. Gerd is an acronym for Gastroesophageal Reflux Disease.

Signs and symptoms for GERD:

Gerd is the reflux or backward movement of stomach juices and/or its contents to the esophagus (the food pipe). The disease does not come with a multitude of symptoms. In fact, there is a characteristic burning sensation in the chest right after eating anything at all. The gas bubble burning up and down the chest goes all the way to the throat, feeling of a lump being stuck in the throat along with frequent burps are the main symptoms of Gerd.

What are the common causes for GERD?

Imagine a road block at the end of a one-way lane. Now to allow a smooth traffic flow this barrier must only allow one way traffic and never the other way around. Same is the role of Lower esophageal sphincter (LES) present at the end of esophagus. Whereas, this sphincter becomes relaxed and remains open in Gerd allowing a reflux of stomach content.

Other probable causes are:

Generally speaking, any food that gives you ‘Guilt’ after eating is going to trigger Gerd. Ok fine! We don’t have to be so dramatic about it. But certain food groups are damaging to even a healthy gut; let alone a diseased one.

Therefore, following foods must be avoided:

Foods that help with treating Gerd:

Gerd may or may not be pathological; but it is that one disease which can be substantially improved and even treated with just changing diet. Your diet can make or break the mucosal layer of your gut. The gut flora and pH of gastric acid can be easily managed by improving the dietary habits.

Ash is the residue or the metabolic by product of the food consumed. Acidic ash is said to weaken the immune system thus making body more prone to infections.

Alkaline ash on the other hand strengthens the immune response of the body against toxic and harmful agents.

Some of the foods that will show improvement in symptoms within a matter of days are as follows:

Just like we learned in the chemistry lab (that we all loathed), any acid can be neutralized with bases a.k.a. alkalis. Our stomach environment is the same in this respect. The acids aggravated by eating wrong foods can be neutralized by eating alkaline foods and drinks. The over all pH improvement will not occur with just one serving though.

Oatmeal does sound boring and well “basic” (pun-intended). However, oatmeal has the potential to revolutionize the metabolic health of the body by folds. Once in the stomach, the oatmeal will absorb stomach acid as well as other toxins that might change the gut flora for worse. The fiber in the oatmeal will then act in the intestinal movement of bolus, thus enhancing excretion of unwanted foods.

Papayas are your partners:

Papayas are amazing in treating the symptoms of not only Gerd; but also, of many other stomach and intestinal diseases. They are pack load with digestive enzyme esp. papain. Papain is a proteolytic enzyme that metabolizes proteins present in the food. Proteins when digested can then be rapidly adsorbed into body in the form of amino acids.

For a Gerd patient it is essential to eat food and medication that will improve digestion and absorption in order to minimize the reflux of stomach content. The longer the food substance remains in the stomach cavity; the more the chances for reflux, gas, burping, heart burn and eventually vomits.

I know it sounds strange, considering the ever so pungent taste of ginger. Although the pungency of ginger may seem like it’s extremely acidic. However, ginger has the neutral pH of 7.0

Ginger helps alleviate the Gerd symptoms by merely boiling a small piece of ginger in water to make a plain ginger tea, or by even adding it in the food. This is due to the presence of 6-shogoal, zingerone, and 6-gingerol. These constituents exhibit anti emetic properties. Therefore, they prevent the reverse movement of esophagus. 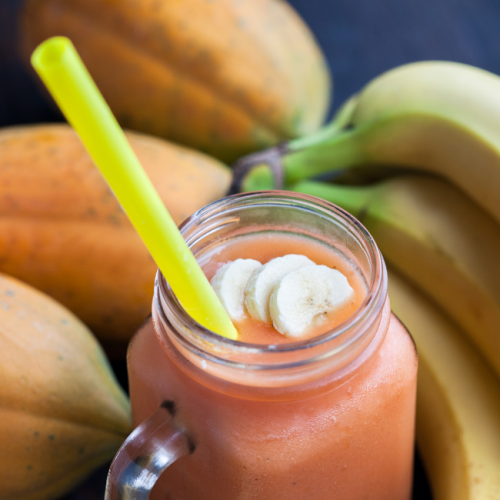 Gerd may or may not be pathological; but it is that one disease which can be substantially improved and even treated with just changing diet. Your diet can make or break the mucosal layer of your gut. The gut flora and pH of gastric acid can be easily managed by improving the dietary habits. When you feel something strange in your gastroesophageal. Use this Gerd Buster smoothie, to ooze the pain.
Print Recipe Pin Recipe
Total Time 10 mins
Course Drinks
Cuisine Juicing
Servings 1
Calories 349 kcal

You can soak the oaks in coconut milk a few hours before. This will make them softer and help eliminate the chunky texture.

Licorice is an essential dietary part for treating Gerd and other digestive disorders. Licorice is now a days available in a processed form called as Deglycyrrhizinated Licorice (DGL).

It has following important uses:

Banana for the immediate treatment:

Chugging down one antacid after another is a common practice among people suffering from heart burn and Gerd. However, nature has been ever so kind in providing a natural antacid in the form of Banana. Bananas improve the pH and thus prevent reflux motion of esophagus.

Well wouldn’t we all want that! A permanent solution to all our problems. But since so many (read all) problems can’t be solved permanently; atleast the Gerd can be. Yes, that’s right! You can get rid of those nasty sour tasting burps and also wouldn’t have to carry a bottle of antacid with you everywhere you go. The solution actually lies in taking baby steps towards betterment. Improve your eating habits, take walks after every meal, avoid over eating, don’t eat spicy foods, and most importantly try to incorporate the above-mentioned foods in your diet atleast once a day. This body will only work for us if we work on it too. Don’t let yourself down.