Alzheimer’s is a degenerative neurological disease with a wide range of symptoms. The causative factors for the disease are as follows:

Genetic History: It is a hereditary disease passed on from one generation to another. The severity of disease may vary from one patient to the other in the same family. Sometimes, serious cases of Dementia may complicate with symptoms of Alzheimer’s as well.

Age: Usually, the appearance of symptoms starts from age 50 to onward. However, the chances of getting the disease increases substantially after the age of 65. Early onset condition can occur from as young as even 40 yrs. of age.

Head Trauma: The disease is also found in people who have had severe head trauma and injury. Some professional sports also involve head injury such as wrestling etc. The prevalence of disease in such sports is also extremely high.

Alzheimer’s being a hereditary disease leaves a very little room for prevention of disease. However, for those who do not have a family history of the disease can adopt an array of lifestyle and dietary choices to prevent the disease from occurring esp. after the age of 50 yrs.

Some of the foods that have proven their worth in achieving this goal include:

Foods containing omega-3 Fatty acids have a wide range of neurological benefits. However, our body cannot synthesize the compound on its own and therefore, needs external supplementation. Omega-3 have a proven to provide protection against neurodegenerative diseases such as Dementia, Alzheimer’s, Parkinson’s diseases etc. The neuronal nerve endings have a layer of lipids on them necessary for the transfer of signal from one neuron to other up until the receiving organs. Insufficient omega-3 can increase the chances of neuronal death.

Following are some of the foods containing omega-3:

Green-leafy vegetables such as spinach, kale, cabbage, watercress etc. have proven their worth time and time again in preventing different diseases. We all hated when the mom used to say ‘Eat your Greens’ but the fact of the matter is that greens keep us happy and healthy.

Cardiovascular diseases are a major contributing factor in onset of dementia and Alzheimer’s. Reduced oxygenation and blood supply can immensely damage the neuronal network in the brain and CNS. This have proven to trigger the onset of Alzheimer’s.

Over the years’ researches have proved the importance of eating a bowl of berries such as blue berry, strawberry, raspberry and Acai berries. They are a healthy source of energy without increasing the blood sugar considerably. It has been observed that eating a few portions of berries once a day can help avoid impairment of cognitive behavior and memory loss.

Turmeric contains a compound such as Demethoxycurcumin, curcumin and bisdemethoxycurcumin that have proven to reduce oxidative stress on neurons which is a major cause for neuronal cell death. They have the potential to decrease the accumulation of amyloid proteins that cause the hindrance in transfer of neurotransmitters as well. Thus, turmeric intake can help improve transmission of impulses in brain and spinal cord.

Over the years, polyphenols have been proven their worth by their exemplary health benefits. Polyphenols contain many beneficial compounds however; Flavonoids are the most useful ones.  These are important for the use in preventing Cardiovascular diseases, neurodegenerative diseases, improving digestion and kidney functions.

Alzheimer’s is sometimes triggered by any neurological anomaly such as inconsistent neurotransmitter release and /or their synapses to other neurons, excess of amyloid proteins in CNS, blockade of electrical impulses etc. polyphenols such as Catechins, L-theanine and other flavonoids have the potential to improve the concentration of happy-neurotransmitters such as Dopamine that can improve cognitive abilities.

In addition, combination of polyphenols with caffeine have shown to provide the right amount of mental alertness and availability. 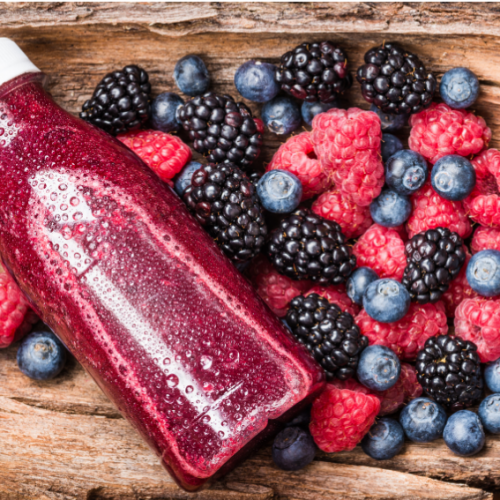 Berries are strong anti-inflammatory agents. They contain rich concentration of constituents such as anthocyanins. Anthocyanins inhibit the production of inflammation causing cytokines. Thus, it is essential that a handful of berries is consumed once a day. This recipe will help get those berries you need in your body.
Print Recipe Pin Recipe
Prep Time 12 mins
Total Time 22 mins
Course Drinks
Cuisine Juicing
Servings 2
Calories 361 kcal

Some of the polyphenols containing foods are as follows:

Thus, in conclusion, a healthy diet can help delay the onset of symptoms and in some cases even stop them from worsening.